This piece is done with ink and color on Chinese "Hsuan" paper (often called “rice paper”) in a large format to attempt capturing the presence of the imposing, all-encompassing grandeur of the Himalayas.  In snow landscapes white and blue dominate. Traditionally the white of the paper can be the background, but it can also be the sky, cloud, mist, river, or some vacuity to balance or enhance the composition.  On top of that, I was unreserved in the use of white pigment, which has been used only sparingly.  I was also unrelenting in employing strong blues for the unpolluted, clear firmament of the Himalayas and the snows or rocks in shade.  It is irresistible to drown myself into the sensibility of the blues so deep it engulfs my whole being.

Two modes of styles are employed. The more traditional mode emphasizes the use of brush and the texture strokes that model rocks and delineate trees. The hand controls the brush in varying pressure, speed, and strength derived from the aesthetic discipline of calligraphy.  Limitless possibilities of mixing ink and water create rich tonal gradations ranging from light, silver gray, pearl gray, to the dark black of burned charcoal.  The magical ink play among the brushstrokes, the sensitive, absorbent paper, the blending of ink and water can also reflect the play between such physical aspects and the states of mind. The less traditional mode takes advantage of the abstract effects of the play of ink, water and color on rice paper, which can be crumbled to render the effect of the snow on rocks, and of the suggestive effects of tonal variations. It bespeaks the sense of struggle on the borderline of traditional and modern, Oriental and West.

Though I wasn’t born into a difficult life, nor can I impose anything rebellious upon myself, the beacon; the leitmotif has to come from the voice in my heart.  I want to capture whatever sublime or dark beauty
nature presents.  There is no intention, however, on total abstraction, for I see abstractions already formed
by nature; abstractions that defy nominal designations of names and languages, and that challenge the fabrications of the mind.  Expressive explosion is not the manifested mode, but the writhing, soaring, deeply chiseled, always rumbling mountains can be expressive of underlying boiling inspiration, gripping sensations, collages of thoughts, upheaval and dying down of experiences, and whatever left distilled or nearly completely eclipsed through time and aging….  There are all the rich fabrics of experiences and indulgence in beauty; woven with the thirst to capture the sublime monumentality and the intense power endowed by the rich spiritual traditions.  They can be mindscapes that I long for, but can never be.  They are the connections with remote pasts, places, with dreams, spiritual longings, spiritual reality, and with the cosmos, the unknown. Where the mind longs for but the body is too fragile to go, I am thankful for photography and books. 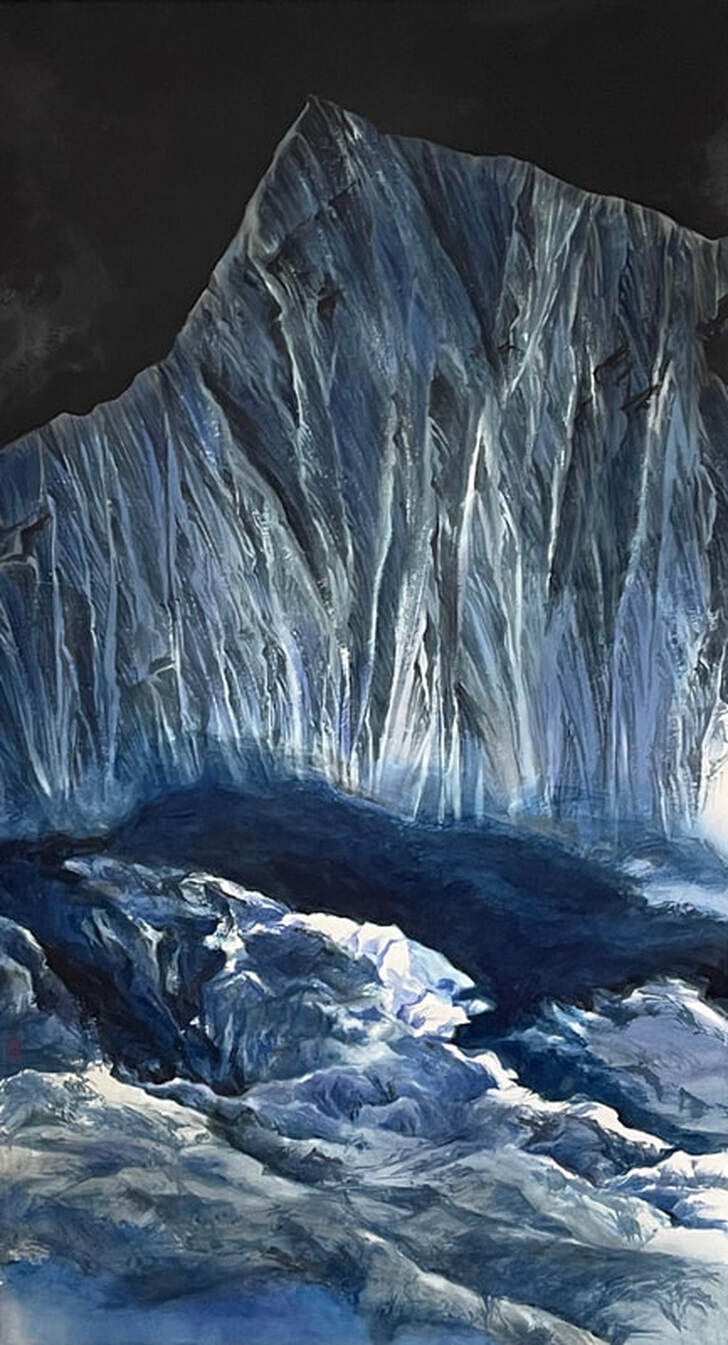 "Chungking Glacier"
Image 54" x 32"
Chinese ink on silk scroll
Ming-Chien Liang is an artist working in a representational manner in Chinese and Western
traditional mediums. Growing up as the third generation in a family of artists
she loves to draw and has diverse interests in art, music, and literature.

In landscapes she depicts the sublime Himalaya and Tibetan plateau—somewhere she could never be—a world of the inner realm imbued with spiritual power.  She also loves to roam and capture the charm
of the forests and brooks as in Robert Frost’s poetry of New England, California coastal forests and creeks
that reminds her of Schubert’s songs, the pristine red wood forests that in her imagination elves
​and fairies dwell, and the grand panoramic of the National Parks in the American West.